Beware of the Scams

The following information could save you a lot of grief. Not only with respect to saving you from being scammed out of your hard earned cash, but more importantly save you from a possible health hazard and harm.

There are a few fake review sites recently listed at the top of Google and various other search engines. Their new number two ranked product as well as a few of the other products that they peddle on the fake review sites are grossly misleading and here’s why.

The fake review sites are claiming that the products themselves have been clinically tested which is a lie. In fact their #1 listed product has only been on the market for just a few short months so having achieve any real clinical trial is completely impossible.
The real truth is this: Real human clinical trials cost thousands and thousands of dollars and years to complete.
Yes, it is true that one of the ingredients used in their product, called Butea Superba, has been clinically ‘tested’. However ONLY ON RATS and ONLY IN THAILAND.

Why are these sites creating so much hype and giving false hope over an ingredient that has proven to do absolutely nothing to the male anatomy?
The ingredient Butea Superba is not an all new wonder herb. In fact it has been around for years. The FDA added it to their ‘poisonous plants’ list as far back as 1964. But these scam artists still insist that it as the best known ingredient for penis enlargement ever to hit the market.

Our research team has investigated Butea Superba and it should be noted that every study conducted outside of Thailand does NOT show any promising results. The so called clinical trial literature posted on their site is all smoke and mirrors and basically garbage. In truth the real clinical studies that were performed on humans paint another picture altogether.  Here is the conclusion of the most recent study of the herb in 2009.

CONCLUSIONS:  A ‘natural’ health product containing BS was more effective than sildenafil in the first part of the study, but in the second, using another batch of BS, the positive result could not be repeated and no effect was recorded. The conclusion is that the first preparation of BS was most likely blended with a phosphodiesterase-5 inhibitor, (a drug) later confirmed by the supplier of BS (a natural health products company) after their own analysis.

There you have it. In order for the ingredient “Butea Superba” to have any effect it must be combined with pharmaceutical or drug. Please note that the FDA is also investigating so until they have a clear answer we recommend that you stay clear of this ingredient.

3. The Products listed on their sites Do Not hold a Patent.

4. Does The Cheap Price Reflect Quality?

At less than $40 per single purchased bottle, the price of the product itself is cheap as it should be since the product contains ONLY two ingredients. One ingredient that doesn’t work and the other L-Carnitine which helps produce energy (which is naturally produced in the body)  I suppose they are trying to make you think that this new found energy must suggest that something is working. However, as with every high, there always comes a crash.
While some consumers may think that a cheaply priced product is worth a try, it must be noted that high quality ingredients cost money. Low quality ingredients cost nothing. Stay away from the $39 low grade knockoffs because your health may depend in it.

Update: Due to this article exposing the truth it appears that the bogus websites have actually started to change some of their fraudulent statements. However this does not mean that they have decided to stop ripping consumers off.

5. Does The Product Name Constantly Change?

The biggest scam in the industry is are the fake review sites that own the products they list but more importantly the ones who constantly change the name of the brand but still use the same old website and bogus marketing. They do this in order to stay one step ahead of the law so that they can keep on selling their snake oil product via an all new name.

These scammers have also changed the name of their Longinexx brand to ButeaSuperba528. Both are scams because they websites are completely misleading and fraudulent in every way.
Take a look at our screenshot of Longinexx as it was yesterday and now the new brand Superba528. They look rather similar don’t they. LOL 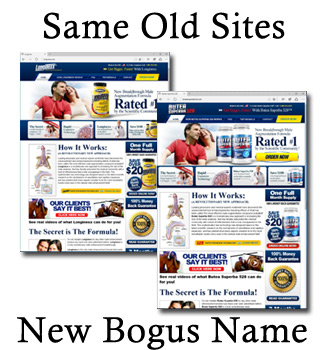 These scammers change the name of their brands every few months so they can rinse and repeat the scam.

We are not going to waste any more time trying to keep you informed and stay ahead of those scammers by posting every new website variation they create so just stay clear of their bogus claims and you will be okay.